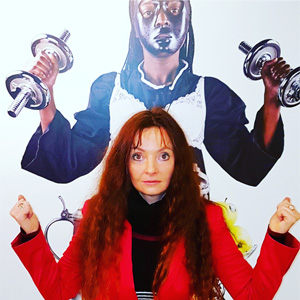 In a society in which stereotypes, prejudices, consumerism and conformism dominate, the German artist Katharina Goldyn has made her “New Man” the antidote to fight the reality of these days.

Comparing her artistic creation with an exLargely influenced by the Surrealist and Dadaist poetics, she wants to demolish the current values, habits and stereotypes in the hope of being part of a new world.

Therefore, through her art, defined as “visionary” by the artist herself, the concept of «material culture of our times» is no longer extistent. (…),

In Goldyn’s utopia we also find ourselves in a world where the Christian tradition is re-imagined, the idea of the male apostle is replaced with “the female apostle” and the image of the Pope becomes the one of a female Pope, inspired by that legend – most likely originated in the orthodox antipapal world – according to which between 853 and 855 A.D. a woman named Giovanna led the Church of Rome.(…),

Goldyn, with her impact works, wants to convey a message, her dreams and her desires: in the name of freedom, carefreeness and spontaneity, she wants to tell us observers to teleport into a different world, a parallel universe where women hold new roles, a reality far from stereotyptes and preconceptions that allows us to escape from the problems and anxieties linked to all those clichés shaped by today’s society.

GOLDYN, P.h.D. (born in 1974) is a Munich – based artist from Poland. After graduating from the Institute of fine Arts in Czestochowa, Poland (1989-1994), sche continued her studio at the Wroclaw (Breslau) E.Geppert Academy of fine Arts (1994-2000); department of painting with Diplom and Master. Sche obtained a Doctor of Painting and Sculpture from E. Geppert Fine Arts Academy in Wroclaw (Breslau) in 2011. She lives in Munich , where she has one studio, the second one being in Breslau. She is owner and Professor of Studio Zeiler – one oft he oldest private drawning and painting schools in Munich, which has been in existence for 60 years.
www.studiozeiler.de

In 2015 sche won first prize in the 10-9 Nano Art Competition in Paris for her fusion of traditional imagery and new age visual semiotics.
www.art-nano.com